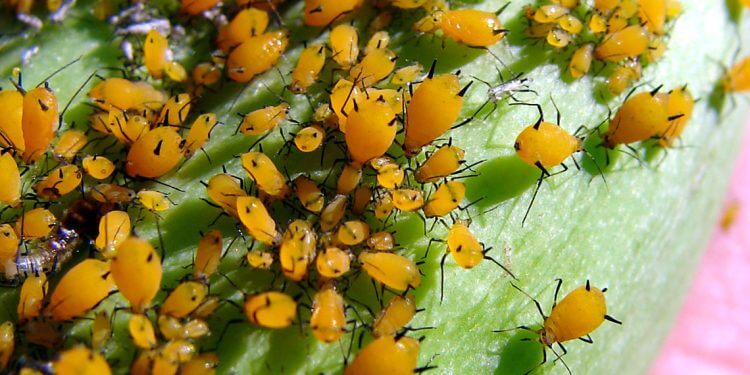 Up until recently it was always expected that if you wanted some aphid control it was either a choice between white-oil or the humble ladybug. Now, changes in biological insect control have meant that the emergence of the Aphidius wasp have been fast-tracked and in many cases can be bought just like ladybugs from biological services throughout the western world.

But, before you rush out and buy yourself a vial you may want to meet this little critter and understand how they work.

Firstly, their appearance is similar to an ant although they have enlarged antennae and sport wings. In fact, they’re almost the same size as an ant and easily undetected especially amidst an aphid colony – the aphids being almost a similar size.

Yet their ability to conquer an aphid colony does not come from stealth as one might expect. Instead an adult wasp impregnates an aphid with its eggs allowing the aphid to live for a few days while the eggs hatch. As soon as they do the young begin eating the aphid from the inside out eventually leaving a mummified shell.

The most exciting factor is the amount of time it takes for this to happen. Basically the life cycle of an adult aphidius wasp is only 21 days. It takes twelve days to reach adulthood and escape from the mummified coccoon and then within the next three weeks the female must mate before impregnating up to 100 aphids.

When you consider the time span for the aphidius wasp compared to a ladybug, the wasp is already up and at them while the ladybug is still in the larval stage. Sure, a ladybug will consume far more aphids in its lifetime but if you’re looking for a quick start on your aphid control then these wasps are certain go-getters.

The downside to these insects is that they leave messy mummy casings all over your plants while a ladybug will consume the aphids holus-bolus.

How to get Aphidius Wasps into your garden

If you’re into immediacy then buying a vial from your local biological service might be the way to go. These vials usually carry up to 500 mummified aphids ready for hatching and should cost less than A$50.

Otherwise, the best alternative is to try and attract them into your yard by planting some of their favourites. These include marguerite daisies, sunflowers, chamomile and yarrow. Obviously they will only turn up during the warmer months – when aphids in active mode – and will hibernate in a pupate state during winter.

Are there any risks with this form of aphid control?

No. Aphidius wasps only target aphids so if the aphid colonies are reduced then the population of these wasps is limited to grow as well. They don’t attack any other insect and due to their brief life-cycle are limited to small numbers so they will never plague in any great amount.

How to Grow a Euphorbia Tirucalli Plant