Building a Garden Arbor And Trellis

The shed project has gone on hold for the time being awaiting another injection of funds. This will hopefully happen around September/ October which will be perfect weather to get into some serious construction. Not! 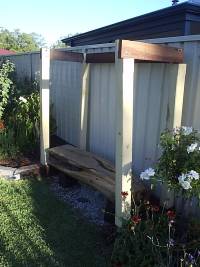 It seems that there is this cycle of money and time in our lives but they never appear to coincide. At one point you may have heaps of time but you don’t have the funds, while at another point you have the money but just can’t organise to have some spare time – or it’s raining!

So the shed project is on hold. However, we have some wonderful friends who have just completed a renovation on their house and were left with a heap of timber which they wanted to get rid of. Enter stage left (Scavenger Stu) who for the price of removing it from their lawn ended up with all this new project resource. Alas, very little of it is useful for the shed but I have other ideas in mind.

The new project is to construct a couple of garden arbors. The first one, seen below, is to cover our garden bench. We plan to put some trellis on it and grow some sort of climber which we are undecided about at the moment. The obvious choice for our cottage style front garden is some Chinese Wisteria. However, I’ve also been toying with the idea of some Clematis. Any ideas?

Grapes isn’t an option because we are soon to construct another arbor out the back which will house a variety of grapes (yet to be sourced also!).

Creating this arbor hasn’t been a stress. The four supporting posts already had stirrups on the bottom which only required me to use a spade bit on the sleepers which were already then and then drop them into the holes. The rebates had already been cut out and the bolt holes had already been drilled. It’s starting to sound like an IKEA project already.

I had to leave the roof beams due to time constraints but will hopefully get back to it this weekend. Then it’s just a matter of attaching some wooden battens for the trellis, a coat of paint and voila it’ll be ready for something to be planted over it.

Growing a Kentia Palm Tree is All About Position