We have now finished the final year of a three-year trial period of daylight savings. At three public referendums that have happened every decade since the 1970’s the ‘NO’ vote has always prevailed – but only ever by a slim margin. So our government, in its wisdom, decided that we needed to ‘experience’ daylight savings for ourselves and legislated a three year trial period that finally ended on Sunday.

I say finally because for us ‘NO’ is definitely on the agenda. We HATE daylight savings. 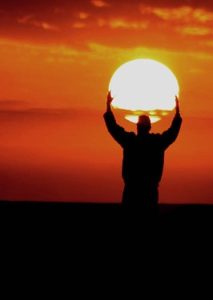 It’s not that we’re against daylight savings per se, but for our state it makes no sense at all. Western Australia is so wide that for us living on the far west coast already enjoy extended daylight hours – naturally. Residents living on the eastern border, however, have only to cross the state divide and be forced to wind their clocks forward.

During the height of summer, sunset does not occur until about 9:30pm (with daylight savings in effect) and we usually don’t see it rise until about 7am. Without DS we already enjoy longer days because naturally the sun doesn’t go down until 8:30pm.

This is ludicrous especially for those like me who prefer to enjoy their pastimes in the early hours of the morning. Plus, our kids struggle to get the sleep they need because “it’s still light outside”.

My garden suffers due to daylight savings. It’s not that the plants are affected in any way, shape or form but my gardening schedule is thrown out of kilter. Watering, which could normally be done at 6pm in summer, has to wait until 7pm but by then all the kids are having their showers and it actually doesn’t happen until 8pm. By then I’m too knackered because the day has been extended that all I feel like doing is sitting down and quenching the heat with a cold beer.

Now, we’re not talking about ‘curtains that fade’ or ‘milking cows becoming disorientated’, we’re just OVER daylight savings. It doesn’t fit our state and on May 16 I’m hoping that voters will bury this issue once and for all.

A recent TV poll – not that you can take these too seriously, but it was interesting anyway – had the NO vote out at 80% ahead of the YES option carrying the remainder 20%. And while our politicians would have us believe that the public is equally divided I can vouch from the people that I associate with that the TV poll is very close to the mark.

Regardless, the pessimist inside me thinks that even if this were almost a unanimous NO, some politician in the future is going to raise this issue again. The only time the referendums will stop is if the YES vote gets across the line. I know, I’m a cynic.

How To Fix a Hose Kink

16 Silver Foliage Plants to Experiment with

16 Silver Foliage Plants to Experiment with