Why Eating Raw Garlic Could Be Good For You 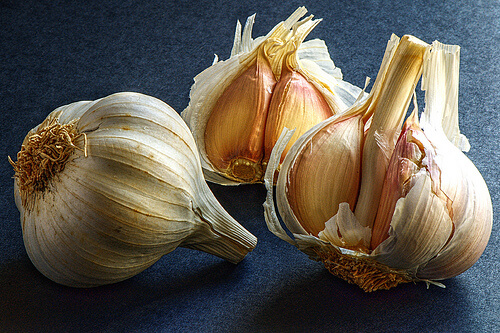 Eating Raw Garlic Could Be Good For You

Garlic has long been the cornerstone of cuisine in the Mediterranean region and considered an essential seasoning for a variety dishes in Africa, Asia, and Europe, yet many people do not realize that there are many health advantages to eating raw garlic. Garlic is part of the Allium genus of plants which also includes onions, leeks, shallots, and chives. It can be grown all over the world and year round in mild climates, so it is readily available.

One of the many historical medicinal uses of garlic has been in the prevention and fighting of the common cold. Raw garlic cloves act as a natural antibiotic when consumed and can also act as a natural decongestant. Since garlic is packed with vitamins, such as C, B6 and the minerals selenium and manganese as well as antioxidants, it can also help prevent one from even getting a cold in the first place.

All of the antioxidants in garlic can do more than just prevent the common cold. Studies have proven that consuming raw garlic is effective in preventing certain types of cancer as well. Raw garlic is rich in diallyl sulphide, allin and ajoene, which have been shown to counteract cancer causing agents such as nitrosamine and aflatoxin which have been linked to stomach, lung and liver cancer. Ajoene and allicin have also been shown to slow the growth of cancer cells.

Raw garlic is also being studied as a treatment for many cardiovascular conditions. It has been shown in some studies to lower triglycerides and LDL cholesterol in the blood while also raising the levels of HDL. Garlic can assist with reducing platelet clumping which thereby reduces blood coagulation and promotes the free flow of blood in the body. Eating raw garlic can also naturally lower blood pressure. All of these benefits work in conjunction to prevent atherosclerosis, also known as hardening of the arteries, which can reduce the risk of heart attack and stroke in some individuals.

In addition to promoting better cardiovascular health, raw garlic can also assist in the maintaining of blood sugars as related to diabetes. A regimen that includes the regular consumption of raw garlic can lower homocysteine levels in the blood which can prevent many diabetic complications. Garlic has also been shown to prevent further weight gain, which can increase the risk of diabetic co-morbid conditions.

While recent scientific studies are just now proving what many users of more natural medicine have known for years, eating raw garlic has been a featured component in folk medicine for centuries. In addition to helping treat prevent the common cold and provide relief from respiratory ailments like asthma and chronic bronchitis, garlic has also been frequently used to cure bloating, stomach cramps and constipation. There are many topical garlic treatments as well, but garlic is most potent when consumed raw.

Given all of these health benefits, one might think garlic is the new super food. Many agree, yet, despite all of the benefits, some are still reluctant to consume raw cloves of garlic, often because of the fear of halitosis, or bad breath. This effect can be counteracted simply by drinking milk with the raw garlic cloves as the mixture of water and fat in the milk can neutralize the odor of garlic. Other than the risk of bad breath, there have been no long term side effects to the regular consumption of raw garlic as many cultures have been doing so for thousands of years with no ill effect.

While there are a number of medications available that can treat the conditions listed above, they often come with a lengthy list of side effects. Raw garlic is a natural and healthy way to maintain and even improve health without resorting to an expensive, and potentially dangerous, prescription.