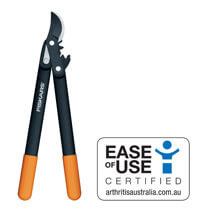 If someone offered you the chance to try out a brand new product – would you be a little bit tempted? What if that product came from one of your favourite gardening tool makers? Perhaps, you might be a tad interested….

To my sheer delight it was more than one product – it was three! And none other than the highly prized Fiskars® range of pruning equipment. Loppers, Hedge Shears and Pruners.

It could have just been another look at products that we’ve seen before. New lightweight plastics replacing vinyl-clad mild steel, blades made of bullet-proof titanium instead of the alloys we’ve been accustomed too and a few gizmos that make a new product…well…a new product.

But from the instant I received these I knew they were different. Their ergonomic shaping, VERY lightweight hardened plastic handles and ….hang on a minute….gear-like cogs replacing the pivot point. What’s this about? Surely it’s one of those gizmo’s we’ve been trained to expect with a new garden tool.
I rummaged through the paperwork trying to understand the purpose of this new feature. But when I picked those shears up for the first time, drawing the blades away from each other it suddenly made perfect sense. These cogs were the leverage needed to increase the power behind each cut.

For anyone whom has ever spent time on a pair of hedge shears – even when well-oiled – will know too well the feeling of sore biceps and forearms from the simplest of activity. With Fiskars PowerGear™ Hedge Shears those memories dissipate like puddles on a sun-soaked afternoon. Cutting through the Edna Walling Westringea was like carving butter with a hot knife – and that’s no exaggeration. Instead, I might be accused of selling them short. They are REALLY that good.

Deb’s parents were down for the weekend and in their early 60′s and both suffering acute forms of arthritis were prime candidates to test-drive these shears. Was my exuberance a little too premature? Not a chance, they too agreed that these were probably the best hedge shears they had ever felt and raved about their ease of use, providing a more than efficient use of power with each stroke.

Fiskars PowerGear™ range was made with this intention in mind. And with the primary population of gardeners in their post 50′s it makes common sense that a company would spend R&D dollars into alleviating one of our ills. Even gardeners in their 20′s and 30′s will appreciate how easily maneuverable these shears are.

Over the next few days I will share my experiences with the Pruners and Loppers. If they’re anything like these hedge shears, I’m going to end up pruning the garden months in advance.

How to Grow Spinach From Seeds