“You mean there’s a HARD way to grow broad beans?” I can feel you chortling already but you can mock away, if something is too simple then there is always the fringe element who like to make it harder than it needs to be.

In fact, growing broad beans, or fava beans as they’re commonly known, is as easy as popping a seed in the ground, watering it, and then picking the produce once they’re ripe. That’s it. End of story.

Yet, if that were the entire post on how to grow broad beans you can bet the comments to swell asking for all kinds of further information and advice. Queries would range from “I’m getting a lot of flowers but no beans” to “How do you know when they’re ripe?” or even “How should I cultivate the soil before I plant the bean seeds?” The answer: see above.

To grow broad beans successfully they require 5 simple things; a growing medium, water, sun, support and a little patience – in that order.

The Growing Medium – broad beans can grow in almost any growing medium; soil (whether it’s sandy, loamy or clay), hydroponic gravel beds and even containers (provided they’re deep enough). The growing medium doesn’t need to be rich in humus or nourished with fertilisers. Instead, the broad beans will grow in the most impoverished soils and add nitrogen back to it as it matures.If you have soils that really need some serious amending then growing a few crops of broad beans will certainly assist the process for you.

Water – as broad beans are a cool season legume annual rainfall is usually enough moisture to satisfy the needs of these beans. However, as they ripen off in spring they will often require some supplementary watering. If you cater for them every 2-3 days then this should be enough to keep the plant healthy and the beans growing.

Sun – like most vegetables, broad beans need at least a few hours of full sunlight per day so growing them in the shade is not going to be too effective. They will grow in partial shade but the plants are often stunted in height and more susceptible to disease. Plus, the beans take much longer to mature.

Support – all beans need some support. Either some trellis against the side of a wall, a climbing frame or even a teepee will suffice. Broad beans are much stronger than many other legumes but they still have a habit of falling over once they’re laden with fruit. The best way to keep them supported is to loosely tie them as a bunch against their support. This should keep them growing upright and not snapping at the base. 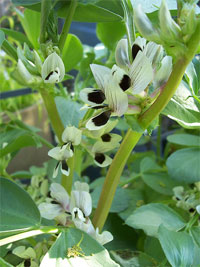 As for the patience, growing broad beans will test yours. Most legumes germinate quickly, grow to their full height and produce mature fruit quite quickly. Not so with broad beans. Every part of their growing cycle seems to be naturally slowed to a snail’s pace. But, if you’re willing to just let them do their “thing” they will succeed in the end.

Once the broad bean plant starts growing past germination it’s quite quick that their flowers will start to bloom in readiness for pollination. However, it can seem like months before any of those flowers start to produce bean seeds. Then, its another few weeks before they grow large enough and their shell begins to harden off somewhat before they’re ready to be picked.

But the best part of growing broad beans is that you can save a few, dry them out and then replant for next year’s harvest. They truly are one of the easiest beans to grow in your garden.

Will you be buying a Nazi Garden Gnome?