When you mention the word “peppers”, depending on whom you’re talking to, it can illicit a plethora of different meanings. In Australia, for example, we call pepper plants “Capsicum”, hot peppers are known as “Chillies” and the only thing we refer to as pepper is the spice that’s ground from dried peppercorns. However, throughout the rest of the English-speaking world it’s apparent that peppers refer to sweet peppers – a member of the Solanaceae family.
While the way we define them may differ the methods for growing pepper plants remains the same – we just grow them at different times of the year. The season for success is spring through summer when all members of the Solanaceae family grow best. The prefix Sola is probably the biggest giveaway referring to the sun – or the months when the sun is the closest to our region. 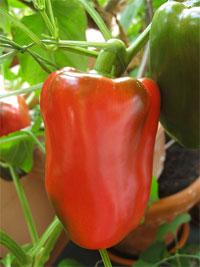 Growing pepper plants is as simple as transplanting some seedlings once the soil warms and the threat of frost has passed. For the keen gardener, cultivating pepper seeds in a coldframe towards the end of winter will give you a headstart and they can be planted out as the seedlings mature provided they’re covered with a garden cloche.

As they grow, pepper plants will require staking to support their fragile frame – fragile due to the weight of the fruit as they mature. The definition of mature peppers depends upon when you decide to pick them. Green peppers are merely an unripened pepper while red peppers have been allowed to ripen for longer allowing the pigments to enhance.

Provided you water your pepper plants regularly, usually every day during the hotter months – and certainly once the fruit has set – they should produce well. Fertilising them with a liquid fertiliser and soluble feed such as blood and bone (bonemeal) will help them immensely and should be applied every 2-4 weeks.

You can also retain the seeds from one, or two, of your more mature fruit to ensure that growing pepper plants in your garden will continue again the following year.

Make your own Garden Windows