How to Control Stink Bugs

Stink bugs are those shield-shaped bugs that look incredibly harmless, forage on native plants, emit an odour when provoked and generally keep to themselves. All in all they have very little effect on our daily lives or our gardens yet we’re intent on ridding the planet of these “apparent” nuisances.
Stink bug control is a term that could colloquially be ranked with “witch hunt”. It assumes that as gardeners we are intent on removing, or at least managing, the devastating effects of these bugs. It offers us some solace that if we spread a few chemicals around we’re sure to hit the target and kill every stink bug in the vicinity. While this may be your method of gardening it goes against the grain of natural organic horticulture. 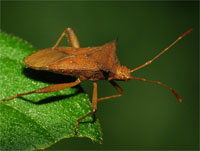 Stink bugs have a place in our gardens. As do the praying mantis, Aphidius Wasps and even sowbugs. They’re all part of the wider ecological habitat that occurs in our garden with each part playing their part.

So what do stink bugs do? Primarily, they eat. They favourite food source is native vegetation and they will only move onto exotics if their preferred diet is in short supply, or begins to mature towards the end of the season. They will sometimes eat fruit but usually they are unable to pierce its protective skin so can only consume those that are already damaged. In other words, they’re very helpful scavengers.

However, there is the reality of the reproducing stink bug. Control in this area is possibly one that needs attention, especially if you live in warmer areas where the stink bugs have the possibility of laying two egg deposits. Each deposit consists of hundreds of eggs and unless there are some natural predators available they can grow quite rapidly into plague proportions.

Therefore stink bug control is all about encouraging their natural predators into the garden – mainly local bird species. While it may seem like the best way to rid stink bugs from your garden is to grow exotics instead of natives, your exotic plants won’t attract their predators and hence the population will increase. It seems like a roundabout way of controlling these insects but the exotic option will only hinder your stick bug control efforts.

The odour that stink bugs emit when provoked is a natural defense mechanism. It is also the way these bugs find their way back to your garden once their winter hibernation period has ended. Hard-pruning your natives prior to spring is one method of control that may hinder their return to your garden, in any great numbers at least.

However, the humble stink bug does very little damage within the garden environment and unless their numbers grow to plague proportions can easily be allowed to enjoy their surroundings as we do.

The Garden Hopper – Scooting ‘Round Your Yard

Plant problems and how to solve 99% of them

Plant problems and how to solve 99% of them