How to Grow a Euphorbia Tirucalli Plant 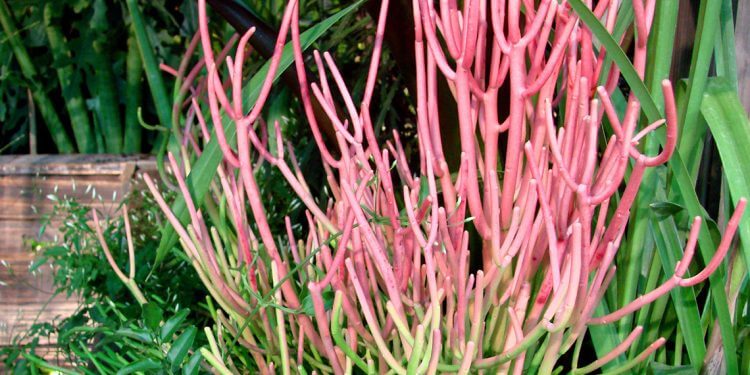 Euphorbias are such a vastly different genus of plants. Unlike other plant groups – take Asteraceae as an example where you can readily identify whether a plant belongs to this family or not – Euphorbias host a bunch of characteristics that almost appear diametrically opposed.
According to this site, Euphorbiaceae exhibits these common traits;

In the light of that framework, consider that Poinsettias (euphorbia pulcherrima), the Castor Bean plant (Ricinus communis), the Crown of the Thorns (Euphorbia milii) and Spurge (Euphorbia serrata) are all related – in fact, they’re cousins. Would it be possible to find a family any more diverse?
So, when it comes to understanding that euphorbia tirucalli is related to this bizarre family, one only has to observe the close relatives to realise that it makes sense. Actually, it looks rather at home with its siblings in a way that would make Billy Ray Cyrus look comfortable if he moved in with the Osbournes.

Euphorbia tirucalli, commonly known as the Pencil Tree for its tentacled growing habit, is one of the most gorgeous architectural plants that you could grow in your garden. It’s best back-dropped by a wall to really appreciate its shape and form but against soft-leaf plants it looks a treat as well. And with some of the newer hybrids, such as the Firesticks Pencil Cactus picture above, this plant can really boost any garden.

Originally from Africa, but growing without abandon in northern Australia, you can quickly gauge what type of growing conditions this plant needs. Hot, wet summers and fairly dry winters are its preferred climate but it can grow just as well in temperate growing regions that exhibit dry, hot summers and mild winters. It’s not a fan of frost and would most probably ‘close-up-shop’ if confronted with snow.

Euphorbia tirucalli likes a well-drained growing medium that’s not too rich meaning that gravel beds or sandy soils are ideal. And, provided conditions are right they can grow up to 5m (16ft) without too much trouble.

This plant does flower but its blooms are fairly inconsequential and even its foliage covering is insignificant. It is much more sought after for the cylindrical branched stems that give it its character than any other reason.

One note of warning: this plant was once used to produce latex and its sap is very toxic and poisonous. If you have small kids who might find it an attractive play-toy you may want t consider removing it.