First cab off the rank is Amy Stewart from the very sassy Garden Rant and also her personal garden blog, Dirt. She needs no introduction, but if you’ve just landed from another galaxy you can find out more about Amy at her website. 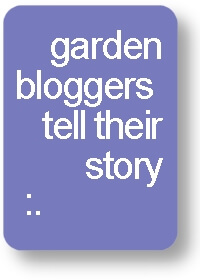 When did you start gardening as a hobby?

I started gardening 12 years ago. I was fresh out of college and had just moved from Austin, TX to Santa Cruz, CA. I had escaped the heat and for the first time, I had a little bit of land, some time on my hands (no more tests to study for!), and a little bit of money from my first real job. I quickly fell into a routine of getting up on Saturday morning, going to the nursery, and coming home with my car full of plants. I’d spend all weekend in the garden, clearing out weeds and replacing them with whatever crazy thing had caught my fancy. No plan, no organization, no clue. But it was fun! And this story formed the basis for my first book, a gardening memoir called From the Ground Up.

Why did you start blogging about your garden/ gardening topics?

I actually started blogging when my second book, The Earth Moved, was about to come out. I thought it would be fun to blog about the book tour and about earthworms in general, which very much included the worms in my own garden. I started that blog when Salon.com was hosting bloggers through RadioUserLand, and then I migrated to Blogger.

Because Blogger wouldn’t let you create categories, I created a second blog when we brought home baby chicks from the feed store. I wanted a place to post pictures of my fabulous chickens! And then I started a third blog just to write about general gardening topics. It all got to be too much, so now I just have one blog at blog.amystewart.com and I imported everything from my old blogs. And I moved to TypePad, where I can categorize my posts, so it’s easy to find all the chicken posts, all the earthworm posts, all the garden posts, etc.

I’m about to go on a book tour for my third book, which is called Flower Confidential, so I’ll be blogging from the road again. This time I hope to really geek out and get one of those clever smart phones that lets you post photos and text to your blog right from your phone.

And now I’m part of a group blog called GardenRant. It’s just about the most fun you can have with your clothes on. (Wait a minute–who said you had to keep your clothes on? I’m not telling!)

What’s the best gardening tip you picked up along the way?

Dirt! There is nothing more important than good soil! Spend the rent money on compost! Spend the grocery money! Feed your garden and it’ll feed you!

If you had to start your garden again from scratch, what would be the first thing you would do and why?

I started by having every blade of grass, weed, and shrub ripped out of the ground and topped off with compost. They stripped the land around my house bare. I’d probably do that again, but I’d probably try to find a more affordable way to do it and maybe try to smother grass rather than rip it out, just because I lost some good soil and worms that way. I paid for that job on a time & material basis, and it ended up costing a fortune. I did get the joy of seeing truckloads of compost in front of my house, though!

If you were only allowed to have one plant in your garden, what would it be?

Are we talking genus or species? If it’s a genus, I say salvia. They thrive here on the northern California coast, they need very little water during our dry summers, they are not bothered by any kind of pest, they attract hummingbirds and butterflies, they’re gorgeous, they bloom for a long time, and they are insanely easy to propagate.

If it’s a species–just one species–I’m going with lavender. Lavendula intermedia. Even when it’s not blooming, it looks great and I get that gorgeous scent. Imagine an entire garden packed with lavender! It would be like living in Provence!

What will your garden look like in 10 years time?

It’ll be a fabulous little rooftop garden in Manhattan’s East Village. I’ll have a living roof planted with native grasses and sedum, pots full of tomatoes, flowering perennials, and a few fruit trees, and a chicken coop with a high-tech cooling system so the girls don’t turn into roast chicken up there. There will be seating for about 10 of my closest friends, happy little glowing strings of lights, and a little cocktail bar.

This is, of course, an utterly insane and grandiose fantasy. Back to reality: I hope that in 10 years, I will have slowly tackled all my garden mistakes. For instance, this year I allowed rose campion to re-seed in the front yard because who can resist those fuzzy silver leaves? But once they were finished blooming, they were BOR-ING! I’m going to try to make the front less about flowering perennials that die back to nothing, and more about grasses and bigger perennials that hold their shape throughout the year. I thought it would be fun to have a garden that went insane for 3 months in spring/summer, but it turns out that winter is awfully long, so having something like ornamental grasses that sway in the wind and look interesting in the rain will be more satisfying, I think. I’ll move a lot of stuff to the back and figure out how to fill in the gaps.

There are lots of “problem areas” in my garden yet to tackle, so I’ll probably get around to one of them every year. And by the time I work my way through all of them, the one I’ve neglected the longest will be a problem again!