According to Boing Boing this mosquito catcher extraordinaire is capable of picking up as many as 38,000 mosquitoes in a night (estimated by weight 1 gram » 1,000 dried mosquitoes).

The SkeeterBag was developed almost 3 years ago and as part of their pitch they claim;

In the long run Skeeter Bag™ breaks the breeding cycle and reverses population growth. Not to mention, the satisfaction of seeing thousands of mosquitoes in the bag and knowing that you did it with ten bucks and a fan. 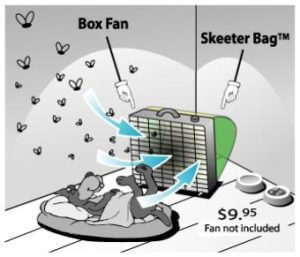 If it achieves even half of what they profess I’ll be getting hold of one for summer.

Would You Dispose of Toxic Rubbish in Your Own Backyard?

Would You Dispose of Toxic Rubbish in Your Own Backyard?