Just when we thought we didn’t have enough projects on our plate we decided to start another one. The shed is still on hold, the water feature is waiting for some design stuff to be done and our outdoor room needs the paving to be finished.

So it seemed like the logical time to start another one.

To be precise we’ve been waiting for a friend, who has the knowledge I lack in erecting a pergola, to have some free time to guide me through the process. It’s not that constructing a pergola is a particularly difficult task it is just that we’ve decided to use bush poles as our supports. 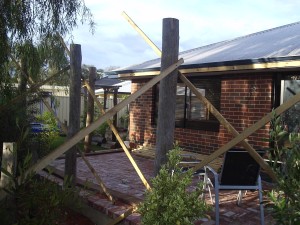 Bush poles are as the name suggests “poles from the bush” meaning they haven’t been sawn or dressed to conform to any straight lines. Therefore, rather than using a spirit-level or plumb line to keep things straight you have to rely on your eye. Not an easy task.

We didn’t start construction on the pergola until after noon however we were able to get this far and have all five poles erected. This meant that each pole needed a couple of notches cut out from the bottom and the majority of excess removed from the top. Then they had to be positioned delicately atop a galvanized metal stirrup and braced against anything that wouldn’t move.

They will sit here for another few weeks until we can coordinate a time for both of us to place the ring beam around to support them permanently. In the meantime, I wil have to start work on the trusses that will support the roof.

It’s all very exciting. We might even have some of these projects finished before Christmas.

How to Grow a Luffa Sponge

What a Plant Leaf Can Tell You About its Health

What a Plant Leaf Can Tell You About its Health