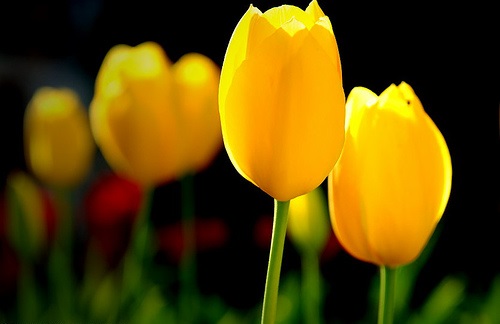 If you were playing a word identification game and the host mentioned the word “Bulb” your answer would most probably be “Tulip”. They are the most widely known and sought after bulb throughout the world and there is no denying that they are beautiful bulb.

However, tulip bulbs are not the easiest to plant and care for. Of all the bulbs, tulips would be the most temperamental and this behaviour can be attributed predominantly to the climate.

To understand their climatic preferences you need to acknowledge their origins. Unlike common held beliefs, tulip bulbs did not originate in Holland. They didn’t even arrive in Europe until the 16th century. The tulip bulb is a native of central Asia – those cold countries like Mongolia, Siberia and central China – which illustrates an important fact when planting tulip bulbs. They like the cold.

While most bulbs can be grown the world over, tulip bulbs need at least one variable to be consistent – a cold climate. However, this doesn’t mean that if you live in a Mediterranean climate (cool winters and mild summers) you can’t grow them. It just means that it will take a little more effort to plant and care for them.

When to plant tulip bulbs

In warmer gardening zones you may need to acclimatise your tulip bulbs by placing them in the fridge for 4-6 weeks. This tricks them into thinking that they’re in a cold area and can therefore begin to grow.

Potted tulips are a great way to show off these beautiful bulbs and still know where it is you planted them. The pot has to be deep enough to allow the bulb to be planted at its normal depth (2 bulbs deep) and also permit the tulip bulb enough room to develop roots.

Use a high quality potting mix that drains well and after planting apply a good slow-release fertiliser.
You can add other bulbs, or flowering annuals, to the same pot if you wish providing they are smaller and will take less room than your tulips. Lily-of-the-valley or grape hyacinths would make an ideal complimentary partnership.

For varying reasons there may come a time when a gardener wants their tulips transplanted right in the middle of their growing period. They may find they need the area for something else or some type of construction is about to happen which will jeopardise the bulbs. Can they be replanted once they’ve begun sprouting?

Sure. However, you may not get the best blooms you were hoping for, if any at all for that season but it will prepare them to flower the following year at the very least.

Replant the sprouting tulip bulbs in a new position at the same depth you would normally plant just the bulb. Fertilise immediately with a good organic fertiliser such as blood and bone and water in well. If the leaves end up falling over and start to wither cut them off half way to give the bulb some respite. This way the tulip bulb can focus its energy into producing flowers for next year rather then expending itself propping up some foliage.

What to do at then end of flowering

Some bulbs, like daffodils and jonquils, are fine to leave in the ground season after season. Tulips need to be dug up however and left to dry out. Wait until the leaves have completely turned brown and then with a garden fork carefully prise them the top of the soil.

Wash any remaining soil off the bulb and then place as a single layer in a basket or tray that has enough air move through it. Store the bulbs in a cool, dry area until autumn when you can begin to divide the bulbs and replant.

When storing tulip bulbs remember to label them especially if you have different varieties.