Sago Palm: Growing and care for your cycas revoluta 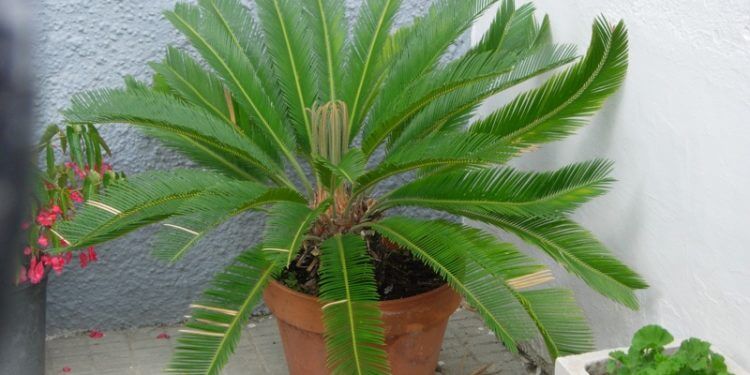 Easily one of the most recognisable palms, and perhaps the most grown by home gardeners, is the sago palm (cycas revoluta. Its peacock-like fronds demand your attention in whatever setting their placed and their annual flowering display is not to be sniffed at either.

The sago palm isn’t actually a palm but instead a cycad – more closely related to evergreen conifers than palm trees. Yet it somehow picked up the common tag of being a palm and is rarely referred to as a cycad other than by those who know. The difference: – palms are monocotyledons (seeds sprout only one leaf) while cycads are dicotyledons (you guessed it…they sprout two leaves from the seed). Hardly a big difference when you’re trying to explain this plant’s genetic background.

While this plant may not be a true palm, its shape and size make it one of the most utilised specimens in landscape tropical gardens. And why not? The foliage, as an architectural texture, is exquisite and as it grows the trunk adds the dimension of height.

Where can sago palms grow?

Almost anywhere the summers are warm and mild and where they will be sheltered out of frosts and snow. If kept in pots they can be grown in cold climates providing they are overwintered and your summers aren’t too cold.

If your climate isn’t characterised by frost-ridden winters then growing a sago palm in the ground is certainly an option. Obviously palms that grow in the ground have less maintenance requirements and can grow much taller than their pot-bound counterparts.

Problems with the sago palm

Caring for a sago palm

Apart from the growing conditions mentioned above sago palms are quite easy to care for. A feed of a balanced fertiliser every six months and caution taken when watering (they don’t need much) is really all these plants require.

If your sago palm has become a leaf catcher then removing the built up compost from with the plants centre is paramount. Leaving it to rot down within the plant can cause a myriad of disease and fungus problems which are better prevented rather than trying to cure.

Does Sago come the sago palm?

Most of us have enjoyed endured sago at one point or another in our lives so it’s not a dumb question to think that this plant may be the source of our child-based memories. However, the true source is from another palm (a real palm) also commonly known as the Sago Palm Metroxylon sagu.

Pics From The Forest

DIY Vertical Garden | How To Start

DIY Vertical Garden | How To Start