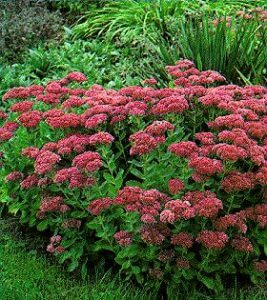 When a plant has as it’s title “Autumn Joy” it predicates the season for which we should be able to expect it’s flowers. Well, this sedum has not let the side down, only 4 days premature of our version of Fall.

I must confess that this is not actually a picture of our sedum as all the batteries for the digital camera are flat. However, this photo does bear much resemblance to the plant I was about to take a photo of – maybe a little less magenta and more pink in the flower – but very similar.

We bought this from a nursery last year, as it was flowering. After it’s flowering period its leaves begin to turn a brown colour and it withers up. We cut the stems back to ground level and from then until it flowers again it begins its travail upwards. The lime green leaves would accent any foliage planting and the flower colour is very trendy at the moment.

They don’t need a lot of sun but require regular watering. They grow to about 70-80cm and look better mass planted than if they were grown as a focal plant or individually.

My Chainsaw is Stihl going

My Chainsaw is Stihl going