Stop! What’s in That Mulch? 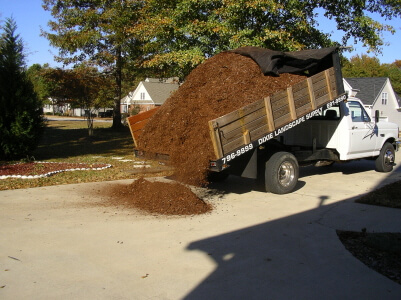 Many home gardeners opt to buy in mulch when the weather begins to warm. In an effort to protect their garden beds from water evaporation and help combat weed growth they instinctively purchase large mulch loads and then spend the weekend dispersing it.

But, have you ever considered what goes into making that load of mulch?

Presumably it’s bark and leaf matter that’s been recycled as a byproduct of the timber millers. And, in many cases this is what you’re getting. However, if you expect it to be 100% of the overall product you’re either living in denial or ignorance is bliss.

Many mulch wholesalers and manufacturers will substitute a variety of items to bulk up their volumes. Wood pallets and crates – usually made from foreign timbers are a great alternative to sourcing natural timber fibres. And, while we would like to believe that it is just the waste products that are being used, many times the whole tree including the inner core is ground.

While this is still all natural it means that you’re the one getting the raw end of the stick. The inner trunk of the tree will decompose far quicker that the bark which means you will have to mulch your garden more often. Suppliers who mulch the whole tree and imported softwoods benefit from cheaper overhead costs and also from increased customer orders but usually charge similar prices to quality providers.

And, what about those articles that warn us of bringing ants and termites onto our properties. Is there any cause for concern? The simple answer is no.

How can you tell what’s in the mulch?

Before you allow the mulch to be offloaded onto your driveway, check the contents. Here are some things you should be able to look for and discuss with the supplier;

The best mulch you can get is from recycling your own plants and materials, and it’s cheaper too. But if you must buy from a mulch supplier, take the time to find out what you’re getting and don’t just settle for what you’ve been given.