We’ve now been in this house for almost 7 years and a lot of growing up has happened in that time. The kids are nearing teenager-hood, we’re getting grey hairs and the suitability of the garden is changing – at least our needs of it are. 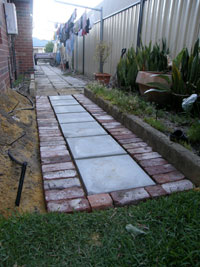 This is the service side, or dead-side, of the house. It’s where most of our home’s practicalities reside or traverse through. If you look carefully you can even see the washing still on the line!

While it’s served our family well since we first landscaped it, it’s also had a few quirks that needed ironing out. Firstly, this part of the paving previously had only one slab width and was skirted on both sides by rendered limestone bricks. This was fine until I cut off access on the other side of the house forcing the lawn mower to navigate between them – even though the mower was wider than the path.

At the other end of the house was where our trailer lived. It was perched atop a postcard-size lawn which meant moving it each time I needed to mow. Plus, it’s shadow didn’t allow much lawn growth and it would often die off in places as well.

So, this weekend was spent re-paving. I had previously ripped out the grass at the front and pulled the rendered brickwork apart at the back but now it meant laying some bricks and slabs. Hiring a brick cutter for the weekend was a great motivator and forced me to get it done.

The next phase of the alterations will be to rebuild the brick walls and then I can start revegetating the garden beds again. This will be the exciting part….

How to Setup a Garden Irrigation System

How to Setup a Garden Irrigation System