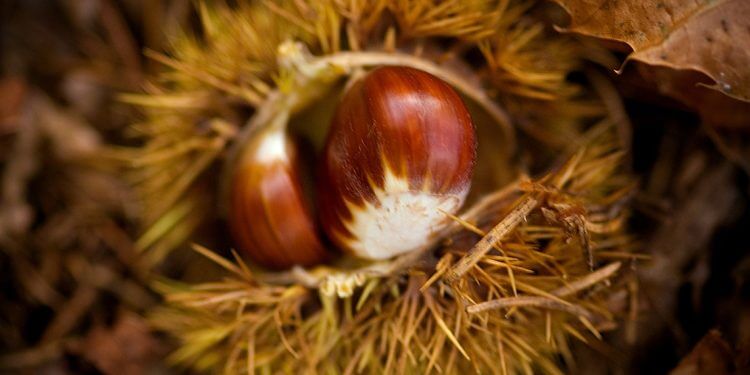 I was introduced to roasted chestnuts many years ago when I worked down south and quickly gained an appetite for them. I’d heard of chestnuts before but only ever seen them referred to in movies where NY locals would grab a bag of freshly roasted nuts from sidewalk sellers and then fumble to open them with gloved hands. There must have been some attraction but having only ever tasted them as canned chestnut meat – not a completely delightful taste sensation – I assumed that it must have been an acquired taste.

In season, they appear in the grocers and I often grab a small bag and entice my children to try them roasted – not a tough chore, believe me. And, I would have been content to continue the chestnut relationship within these parameters. That is until I found that our local nursery is now offering a chestnut tree as a sapling! Mmmm….

Interestingly we have now found a new spot to grow a tree. The projected outdoor bird aviary has been relinquished as one project that we’re not likely to finish in the next 5 years, so instead it seems like the perfect spot to plant a chestnut tree. Then we can gorge ourselves on roasted chestnuts to our hearts content.

How to Grow a Chestnut Tree

The hard part of growing a chestnut tree starts at the beginning. It’s basically won in the selection of the tree – and lost if you’ve chosen the wrong one. When people refer to chestnut trees they seem to interchangeably use the term “horse chestnuts” with common chestnuts.

Do not be fooled though: horse chestnuts are inedible and come from the tree Aesculus hippocastanum. The nut casing looks very different and resembles a smaller spaghetti marrow or small squash, but harder, and inside the nuts look quite similar to their delicious counterparts.

So, if you’re planning on having some edible chestnuts grow in your garden then you need to choose Castanea sativa. The casing around these nuts is quite prickly and resembles a porcupine’s needles.

The chestnut tree grows quite rapidly and produces an abundance of fruit from 4 years old onwards. It fruits mainly towards the end of summer and throughout the autumn months at the same time that it loses its leaves. The only downside of this tree is that it will eventually grow to around 30m (100ft) high.

You could try growing it in a container, thereby limiting its size, but be prepared to repot it every 2-3 years. As it is being repotted the roots will need to be trimmed and a general two-thirds prune will need to be achieved to keep it growing well into the future. This should be performed after the tree has fruited and settled into its dormant period.

Castanea sativa’s are notably a cold-climate tree, originating from Europe, but they have been known to grow just as well in tropical regions provided they are planted in well-draining soil.

Caring for a Chestnut Tree

Chestnut blight is the most concerning disease that chestnut trees face. It’s actually a type of canker that displays itself much like dieback and will reduce your tree to a stump within a very short period of time. There is no cure for this blight and the best cure is finding out if your area is susceptible to the blight and not planting this tree.

If you really want to grow a chestnut tree and blight is prevalent then you may have success by growing one of the hybrid Chinese chestnuts, Castanea mollissima. These are more resilient to the fungus and still offer some similar characteristics to C.sativa.

Chestnuts don’t appreciate their roots being too wet so mulching around them in warmer months should be kept to a minimum and in most cases annual rainfall should be their main source of water. A slow release fertiliser offered at the start of spring should suffice their nutrient needs.

Could This be the Demise of the Chelsea Flower Show?