Types Of Ants In Your Garden Or Lawn 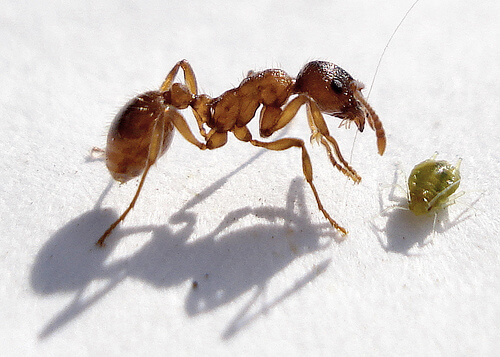 Ants In Your Lawn

Australia is one of the most diverse and unique ecosystems on the planet. Many creatures found on the Australian continent are found nowhere else in the worlds. Insects, and especially ants, are no exception.

Ants belong to the family Formicidae. They are closely related to bees and wasps. The ant family has 16 subfamilies and nearly 15,000 species world-wide. Australia has representatives from 10 of these subfamilies, and 1,300 species of ants. Central and South America both more species of ants, while North America, Europe, northern Asia and even Africa have fewer species. Australian species vary in length from 1 to 30 mm, and range in colour from black, brown, green, red or yellow to many combinations of these colours.

Fortunately, most of these ant species are not common. In fact, the numbers are somewhat misleading. While some of these ants are common everywhere, quite a few species have been encountered by biologists less than 10 times. Some are known only from a single collected specimen.

Ants As Pests: The Locals

When ant colonies butt heads with human populations, it can be trouble. Ants in the lawn can be more than a nuisance – they can be downright painful! Despite having so many species of ants, there are really only three groups of Australian ants that are commonly encountered: bulldog ants, meat ants, and green weaver ants.

Bulldog ants, sometimes called bull ants, are in the genus Myrmecia. They are thought to be relatively primitive ants and are called “bulldog” ants because of their aggressive behaviour. They have better vision than most other ants and vigorously defend their colonies against perceived intruders. Unfortunately for humans, walking in a yard where they have colonized is enough to warrant a response. They have extremely painful bites, and an encounter with a bulldog ant is not something soon forgotten.

One particular species of bulldog ant, the jack jumper ant, has an especially bad reputation. This ant species can inflict an extremely painful sting and is quite willing to do so. Like bees or wasps, the ants inject venom with the sting that can cause an anaphylactic reaction in allergic individuals. Unlike their flying cousins, however, jack jumper ants can – and often do – sting multiple times in a single encounter. It is estimated that 3% of the Australian population is allergic to this venom, and these ants can be quite dangerous. Fortunately, jack jumper ants are not encountered very often in populated areas.

Meat ants belong to the Iridomyrmex genus. These ants, noted for their iridescent blue-green sheen, are the most conspicuous of all Australian ants. They are also the most abundant. Although they are quite aggressive, they do not sting and are commonly considered beneficial. They attack and eliminate colonies of other, more harmful ant species and also kill and eat invasive cane toads. They are omnivorous and, as their name implies, eat meat as well as vegetative matter. They can be welcome neighbours in a rural setting but quite a nuisance when they colonize a lawn.

Green weaver ants, of the genus Oecophylla, are also commonly encountered. Like the meat ants, they lack a sting. They will bite, and weaver ants often spray formic acid directly onto the bite wound. They are often considered beneficial, especially as orchard or garden ants. They hunt and kill insects which are harmful to crops and are highly effective biological pest control agents in the Australian fruit industry. Orchards with green weaver ants produce fruit with fewer blemishes without the use of chemical pesticides. Unfortunately, these ants don’t limit themselves to orchards or to insects. They frequently colonize ornamental trees and are quite a nuisance to workers harvesting fruits.

Ants As Pests: The Foreigners

Three nuisance pest species of ants doesn’t sound too bad for a continent with 1,300 different kinds of ants, but those were only the native species. The majority of ant pests in lawns and gardens are non-native invasive species. The most notable and commonly encountered examples are coastal brown ants, Singapore ants, and Argentine ants. Other species, such as the white-footed house ant, the pharaoh ant and the black house ant are also common pests but are found inside homes.

Coastal brown ants hail from Africa but are now common along the east coast and south to the Sydney area. They are the most common ant pest in many areas. Coastal brown ants infest both indoor and outdoor areas, and they are a serious impediment to gardening. Their nests loosen the soil so much that important crop trees can fall over.

Singapore ants are also common ant pests, especially in north-western Australia. These ants seem to be attracted to plastics, and they frequently infest electrical wiring and irrigation equipment. Like coastal brown ants, Singapore ants are a major agricultural nuisance, especially where crops are harvested by hand. Colonies damage crop soil, and these ants have a strong sting.

Argentine ants came from South America, but they have now decided that Australia suits them quite well and are established pests in Sydney, Melbourne, Hobart, northern Tasmania and Perth. In their native environment, these ants are aggressive and provide a self-limiting control over one another. In Australia, however, that self-aggression seems to be lacking. Biologists believe the colonies are more tolerant of neighbouring colonies because they are all descended from a very limited gene pool. Because they are all in the same family, so to speak, they have formed immense colonies with hundreds of queen ants and millions of workers. In 2004, a colony of Argentine ants more than 100 kilometres wide was found near Melbourne.

It can be difficult to control ants, especially when they have become established in large colonies. Although they have different physical characteristics, their small size can make them difficult to identify. Getting a close enough look to identify the type of ant can, especially the case of bulldog ants, result in painful bites or stings. The best approach is to call a professional exterminator. Exterminators can quickly identify the type of ant infestation and provide a control measure effective for that particular species.

How to Make Your Own Orange Cleaner

Using Coir In The Garden

Using Coir In The Garden