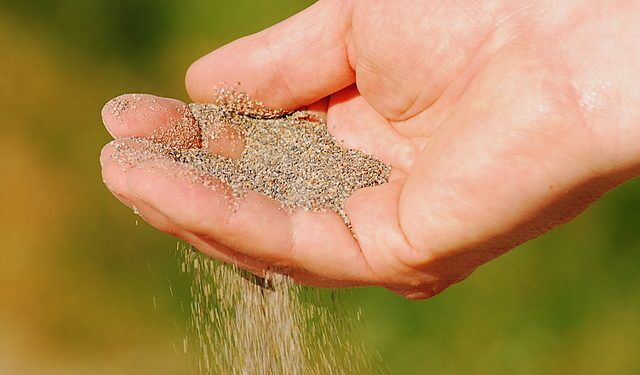 Garden Soil Suffering From The Effects of Leaching

Leaching, in its purest and most insidious form, is the draining of soluble minerals from your precious garden soil. Forced deep below the surface by rainfall and garden reticulation these necessary minerals are no longer available to your plants and are instead leached into sub-artesian groundwater – or worse, low lying creeks and rivers.

Our garden started on sand. It’s the only “soil” we had and over the past eight years we’ve added organic fertilisers, composts, mulches and other soil improvers. Yet, even after all these ammendments, in some places, you would be hard-pressed to notice the difference between what we started with and what we’ve developed.

As the organic matter has been broken down by worms and and other small insects, its soluble wealth has merely vanished below the useful topsoil. The process of leaching has made it almost impossible to create a garden.

How Do You Counter Leaching

If you’ve ever started a garden with sand rather than soil then you’d be forgiven for thinking the solution was merely adding more and more organic matter. It seems to make sense – on the surface – and most gardeners would recommend it as the most viable option. Yet for all its immediate benefits, leaching will finally extract all those delicious nutrients out of the soil leaving it in almost the same state as you started.

The answer is to introduce clay. While most gardeners with clay soils would throw up their hands in exasperation with this medium it truly is the antidote for leaching soils.

To further the point, the perfect soil for gardening and any form of agriculture is loam: a 50/50 mixture of sand and clay. Unlike a clay soil a loam drains well and is easy to break up. But, unlike a sandy soil it retains moisture and nutrients for better plant growth. So, it makes sense if you have a sandy soil that suffers from leaching to increase the clay content as soon as you can.

How to Add Clay To A Sandy Soil

If you were working the other way around (that is, you had a clay soil instead of sand) you would be trying to increase the sand levels. Breaking up the clay with generous handfuls of gypsum is the key and by gradually adding coarse sands into the mixture you will eventually edn up with a delicious loam.

Fortunately, working from the other end of the spectrum isn’t as back-breaking. Adding clay to a sandy soil is quite simple and there are two ways to work with it.

Firstly, if the clay is dry then it is just a matter of sprinkling and working it through the soil. Once you’re comfortable that the mixture is balanced then you can begin watering it in and adding some organic matter and mulch.

However, if the clay is moist then it is much better working with it when it is completely wet so go ahead and let it soak, and break up, in a wheelbarrow full of water. Once the clay is completely wet, tip off the excess water and begin adding your sandy soil to it. Once incorporated this can be re-introduced back into the garden beds and hopefully your leaching problems will finally be over. An addition of organic matter should break down over time but the clay will retain the nutrients, and moisture, for when the plants need them most.

Growing Summer Vegetables: When To Plant