Windmill Palm | How to Grow, Plant and Transplant

Nothing says “tropical paradise” like a nice palm tree growing in your yard or around your pool. Unfortunately, growing palms can be near impossible in colder regions. Cold hardy palms are the exception to this rule. One such example of this is the Windmill palm, which can survive temperatures up to thirty degrees (C) below zero. A normal palm has trouble surviving below fifteen degrees.

Windmill palms were smuggled into the Kew Horticultural Garden in 1849 from their native area in Eastern China. Robert Fortune brought them to England after the Opium Wars were over. 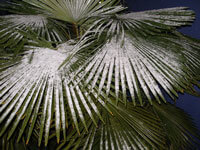 The trunk of the Windmill palm aids in its colder weather survival. It is covered in dense, brown fibers. Above that, the crown of the tree can grow to be about two to three metres in width, and is comprised of dark green leaves between forty-five to ninety cm long. The leaves are covered with a coarse wax coating to further help it survive the cold, and the undersides have a silvery look to them.

Windmill palms can be grown from a seed, or you can purchase trees that have already been started in nurseries and hardware stores. They do the best in the shade or partial sun, and they also do well in small confined spaces, which makes them perfect to plant next to a house. Though they are slow growing, Windmill palms can grow to be up to forty feet in height.

Starting your own tree from a seed is a little more difficult. The fleshy outer cover should be removed, and the seeds inside need to be soaked in tepid water for twenty-four hours. Afterwards, the seeds that have sunk to the bottom can be planted, while the ones that are still floating can be thrown away.
If you choose to buy one that is already started – in a container or with the root ball wrapped in burlap – and plan to transplant it, make sure the transplanting happens as soon as possible. The best time for this would be in the spring during their growing season and when the soil is around eighteen degrees Celsius.

As a rule of thumb, the hole that a Windmill palm is being transplanted in should be twice as wide as the root ball. These trees also thrive in well drained soil; otherwise, they are susceptible to root rot. One way to make sure that the soil drains properly is to mix sand in with the topsoil. A good mix would be about 25% sand and 75% topsoil.

The Windmill palm also prefers its soil to be slightly acidic, and should also be fertilised regularly. These trees, like many palms, crave iron, manganese, magnesium, and potassium. There are also commercial fertilisers sold especially for palm trees.

Watering a Windmill palm is very important, especially the first month or so after planting it. During this month, it should be watered once a day, or watered using the slow drip method. Watering can then be tapered off after that. How much you have to water it depends on the climate, rainfall, and the season. Generally, It can be watered once every few days in the warmer months and less in the colder months.

There are a few things to remember about caring for your Windmill palm. First of all, the area at the base of the palm should be covered with mulch for the first two or three years. This will keep the root system warmer, and there will be less chance of it getting too cold.

There is little requirement for pruning, but if you feel the need to clip off the dead or brown leaves for aesthetic reasons, do so with care. Be sure to avoid damaging the lower trunk and root. Though these types of trees rarely have problems with insects or disease, an open injury could lave them more at risk.

Clematis Armandii – A Must Have For The Gardenow, Plant and Transplant

Rockeries Can Be An Important Part of the Garden

Rockeries Can Be An Important Part of the Garden